Wandering around the Strand in New York I fell completely in love with a little cookbook that I just had to have. I did not just love it, I was in love with it. It was the number one staff pick (!!!), had great photos of tea parties, and was just the cutest little thing ever. If I am a complete sucker for marketing, at least I am aware. As a lover of independent book stores and scones, I felt that I needed the book in my life.
Alice’s Tea Cup, by Haley Fox and Lauren Fox. With recipes adopted from their tea restaurants Manhattan. 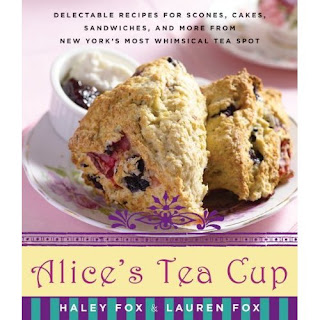 One day later I set out to make a creation from my new book. Pumpkin scones was the mission. One grocery store failure later, and I was standing in the canned fruit aisle feeling the most pumpkin-less that I have felt since the Pumpkin Shortage of 2009. (Yes, it was real national phenomena, my Grandma warned me to stock up.) Anyway, I needed to come up with different ingredients for my creation. I decided on dried cherries and milk chocolate.
An hour later I was elbow deep in a bowl of butter and flour, just a’squeezin and a’mixin as fast as my little hands could go. I am not entirely opposed to the hands-as-kitchen-tools concept, but I was somewhat wary. Just a few days ago, after making a particularly large batch of turkey meatballs, my hands smelled distinctly of raw meat for about 8 hours. Granted it’s more desirable to have sugary, buttery, vanilla dough scent on one’s hands than raw ground turkey and egg, but nonetheless. 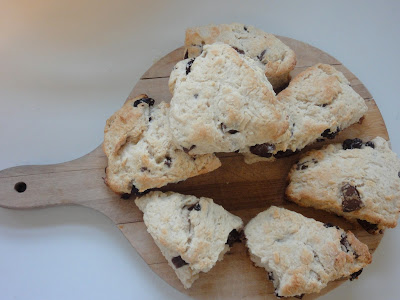 My final product was a recipe adapted from my new book, with the addition of a new ingredient pairing. Their recipe was phenomenal, the end result was a buttermilk scone that was sweet, light, and tangy. The dried cherries and chocolate worked great. I would definitely repeat this combination, although there are so many more to try! 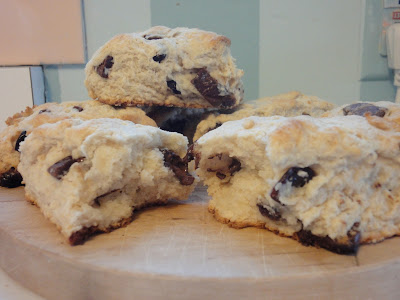