As a wise girl once said, you have get something fast, cheap, and easy. Adopting this saying to eating out, I often think that you can't get a meal cheap, healthy and delicious. Bite is my new favorite exception to this rule.
On 14th between 2nd and 3rd, amidst a smorgasbord of bars and restaurants, Bite offers healthy, interesting options for all three meals of the day.
Joey and I tried it out this Saturday for dinner. My body lately has been overworked, under paid, immuno-depleted, and nutrient deprived. I needed some vegetables and I needed them fast.
I ordered the soup and salad combo, Garden Gaspacho and Mediterranean Salad were my picks. The soup was incredible, the tomato base was spicy and a hint of cucumber added freshness.
The salad was a bowl of field greens topped with roasted eggplant, hummus, almonds, and cucumber. Olive oil was drizzled over and the combination of the hummus and oil created a hearty dressing.
A warm pita was served along side and I used it to dip in all of my veggie juices. 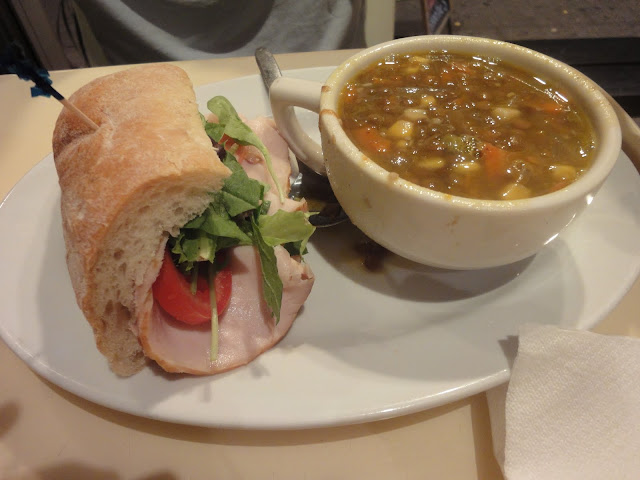 Verdict: Absolutely a place to return. The options were plentiful, the ingredients fresh, and the prices very reasonable, (our dinners were $7.50 and $8.50!)

The hurricane that was supposed to rip Manhattan apart ended at about 9 am. Irenes have been known to be flaky, flighty characters. They say they're going to show up, and then the time comes and they bail.
My roommate, Megan, and I headed out to walk around in the storm's wake.
There was not much to see, to be honest.
There was lots of trash on the street, but wait, there is always trash on the street.
There were broken windows in the bar on the corner. Irene? No, those were shattered two weeks ago.
We walked across the Williamsburg Bridge. Lots of people were out and about, enjoying the breezy weather and the feeling of a world put on pause.
Megan was busy being a cool artist and taking pictures of beautiful and interesting things. I took pictures of tourists in ponchos.

The Williamsburg Bridge has a nice, wide path going across and lots of high barriers to prevent people from going over the edge. (Golden Gate Bridge, take notes.) 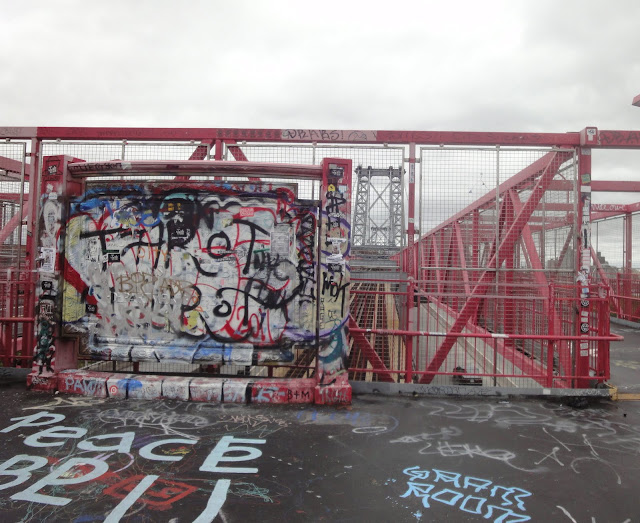 We talked around Williamsburg for a while, being careful to not take too many turns to we didn't get lost. There was a surprising amount of places open, some open even while their windows were boarded up. When there are no subways to take, no jobs to go into, and no storm to hide from, going out drinking and dining is a solid option for many.
Megan and I took notes of many cute places we want to visit on Bedford Street. We stopped for fruit bowls at a grocery store and then turned around to head home. I wore my rain boots although it was completely unnecessary. So I walked straight into some puddles just to make it worth it.
The way back gave great views of Manhattan against a dreary sky. The swollen river and the clouds were an identical shade of gray. 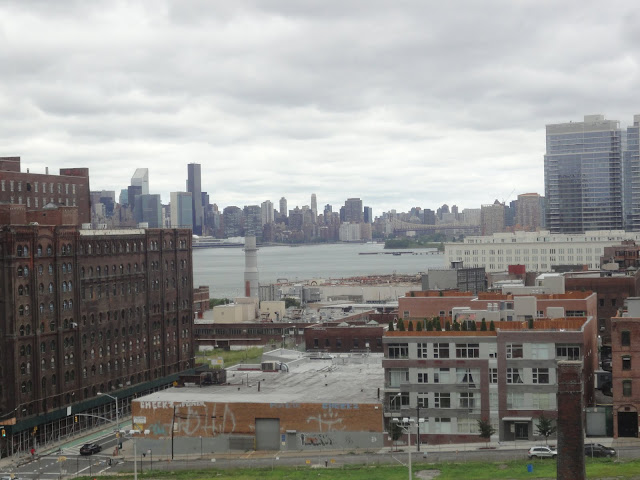 Back to our neighborhood, more storefronts were open and more faces were out bopping around. The streets were slowly gaining speed, but the pace was still comfortingly slow.
Will the subways run before the Monday morning rush?
Will the storm's damage be the worst in the arena of national debt?
And most importantly, will Starbucks be open tomorrow?

Only time will tell. In the mean time, I'll be in my apartment playing drinking games with all the water in our emergency storm stockpile.

Little Italy; a little bit too far to walk in a rainstorm.

Dear New York City,
Please stop complaining about the crazy weather, thunderstorms, and earthquakes. It's only going to get worse from here.
Sincerely,
Global Warming

My New York friends and I celebrated the birthday of one of my roommates last weekend. She may have been slightly injured going into the birthday festivities, but she powered through. Anyone who lets pain and health concerns get in the way of fun does shame to birthdays everywhere.

My roommates and I spent Saturday tanning at our urban beach, (a.k.a. the unfinished rooftop out the emergency exit of our apartment building. At least the aluminum coating is good for attracting rays.)
A party was had, drinks were poured, and a town was painted red. I need not say more.

Sunday was sunny and humid and all day the sky was just threatening to pour a God-sized bucket of water down on everyone below.
The bucket of water began 'a flowin' right when we were going to go to dinner in Little Italy. The birthday girl is a lover of all things Italian, having spent some time living there. So miss out on a dinner with her at a place that she deemed worthy? Absolutely not. Our small but enthusiastic crew headed to Little Italy with umbrellas that proved to be just not enough protection. 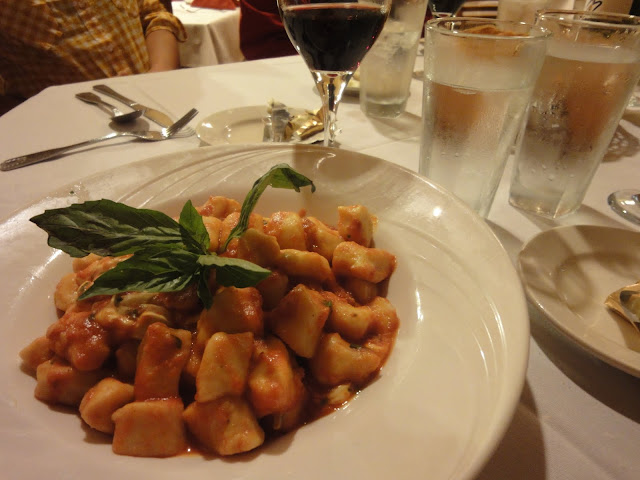 But then we got to the restuarant and the bread was like pillows.
And the wine warmed my cold, wet soul.
And the gnocci made me feel comforted even though the wait staff put us awkwardly in the corner of the upstairs with no windows.
And the free Italian doughnuts at the end of the meal made me full. 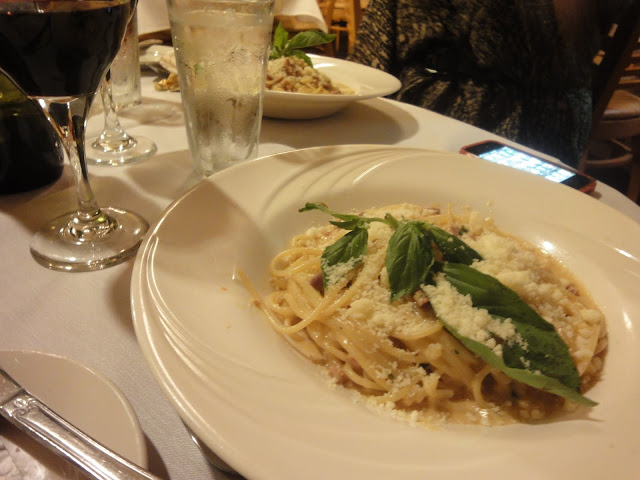 Birthday girl enjoyed her carbonara.
And we all dug the conversation.
And no one dug walking back to our apartment in the rain.

Verdict: I loved the night out with friends and trying out a new neighborhood close-by. But my bowl of pasta was nothing monumental. The portions were serious and I was glad I shared to save money and not be overwhelmed by pasta.  The ambiance seemed a little forced and something likely to attract a tourist crowd. I may not head back, but if you're in the area and a host lures you in with promises of homestyle Italian favorites, your night will be no worse for the wear.

Sitting on a Dirty Curb, Not as Glamourous as it Sounds.

Bolt Bust to Boston, been there done that. But this was my first trip as a resident of New York and visitor to Bean Town. My best friends were waiting four hours to the North and I was anxious to get there, but as the bus-riders proverb goes, ‘One planning to ride standby will be punished.’
And punished I was. I had to wait an additional HOUR on the sidewalk. New found respekk for sandwich-board-wearers and anyone else who spends their day standing. Sh*t's tough. So while standing on the street at 34th and 8th was not ideal, I found a way to make it work, (read: I found lunch!)I made friends with the man next to me and had him hold my spot as I got lunch and brought it back to my place in the queue. My lunch was the one efficient thing about my travel experience.  A five dollar lunch box filled with various Asian dishes of my choice made the most of my money. The Lunch Box, on 34th between 6th and 7th is a budget-luncher’s heaven. Amidst a horde of chain restaurants, cheap clothing stores, and scaffolding, The Lunch Box is a beacon of inexpensive deliciousness. And it fully supports a women’s right to choose. 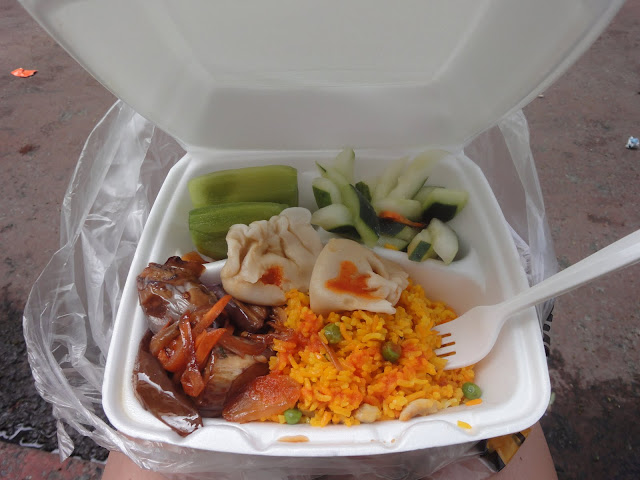 And chose I did. I chose kiwi, cucumber salad, fried rice, eggplant in garlic sauce, and pork dumplings. Hello, feast.
Returning to the bus line I was forced to sit on the curb like a vagrant to eat my lunch. I was feeling rather down and out.  I was an hour postponed because of my own unpreparedness, I was sitting on the curb hoping for a Bolt Bus miracle, but at least I had my lunch box.
And you can get yours too.
The Lunch Box
34th between 6th and 7th
$5.00 lunch box with 5 dishes
Posted by Audrey Ellen at 6:36 PM 1 comment: 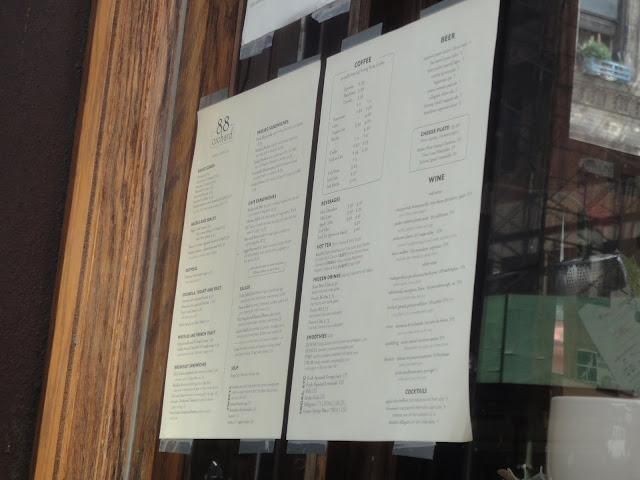 Moving in to an apartment while starting a job looks like this:
There is a toaster, a frying pan, four spatulas, and a Belgian waffle maker on my dining room table.
The chance of me using one of them to actually make something is zero.
So out into the world I go. 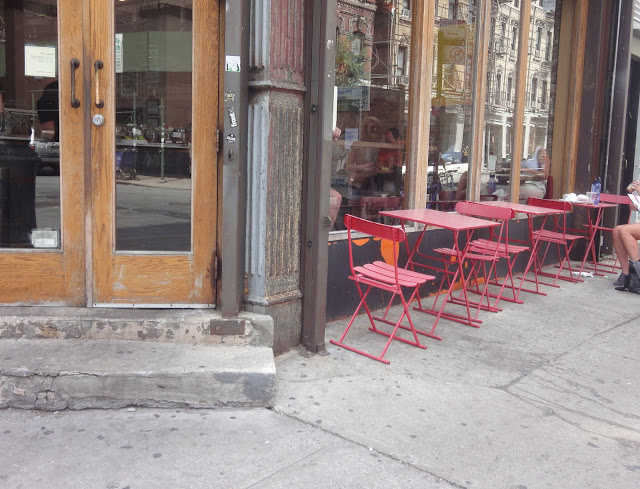 Breakfast with the roommates at 88 Orchard at the corner of Orchard and Broome. While you may want to toss this into the category of 'restaurants-so-chic-they-don't-have-a-name-just-an-address', refrain from judgement for a minute. The place is laid back and has plenty of seating upstairs, outside, and downstairs. Some people are sipping coffee and reading, others are working on their laptops, while some pairs are on a breakfast date, or a post-date breakfast ;) .  The place was casual and the pace was slow, perfect for a Saturday. The staff was friendly and and the menu wasn't full of aggressive jargon about organic, fair-trade, and saving the world one lump of granola at a time. I do love me some granola but there are only so many buzz words one can stomach early in the morning. 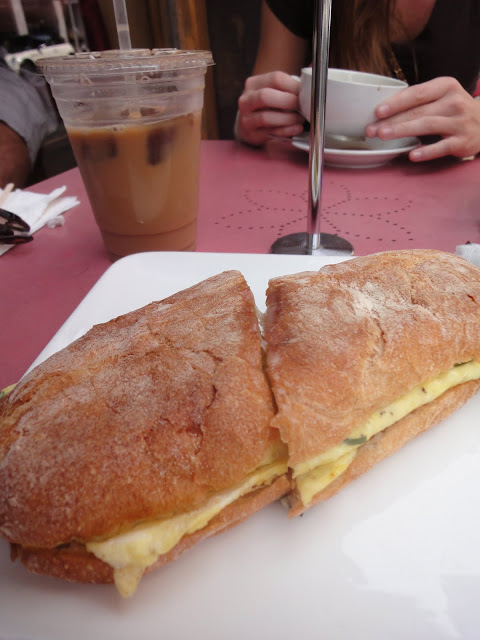 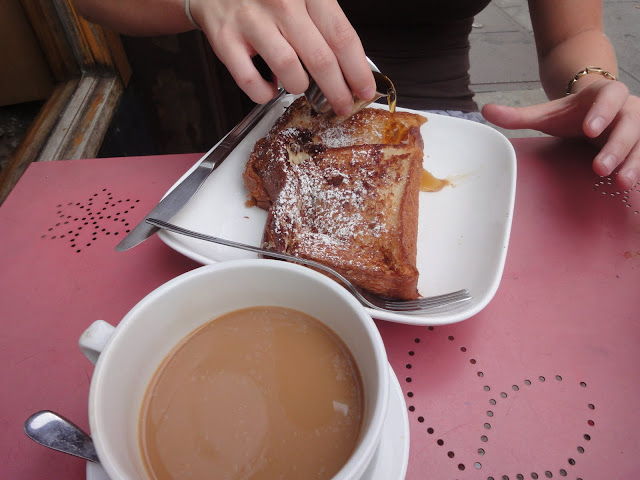 One herb omelet sandwich on ciabatta with white cheddar, one plate of french toast, and three coffees later, my roommates and I were ready to tackle a day at IKEA. Let me rephrase, we realized it was inevitable and we reluctantly got on the F train to Brooklyn.
I will save the drama about my day at IKEA because there is no use dwelling on the negatives, but let's just say there is a person named Matt who works for customer service who will never, ever, be my friend.
And now here is my lifestyle upgrade, I have a furnished apartment and I can sit at my kitchen table and drink celebratory champagne out of a Dairy Queen cup. (Where did these come from? Why do we have them? Why is there not a Blizzard in it?) 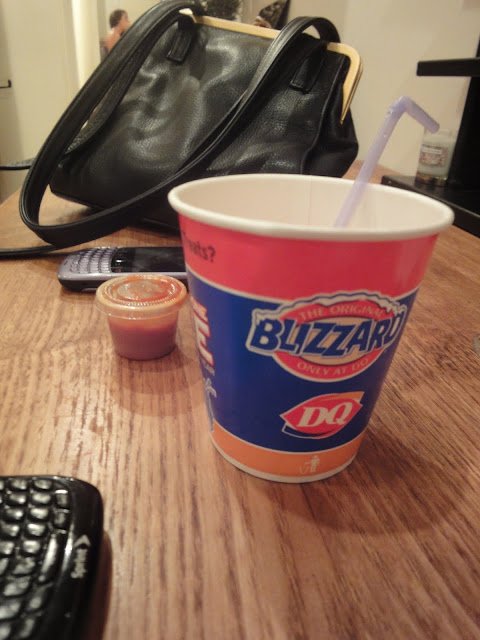